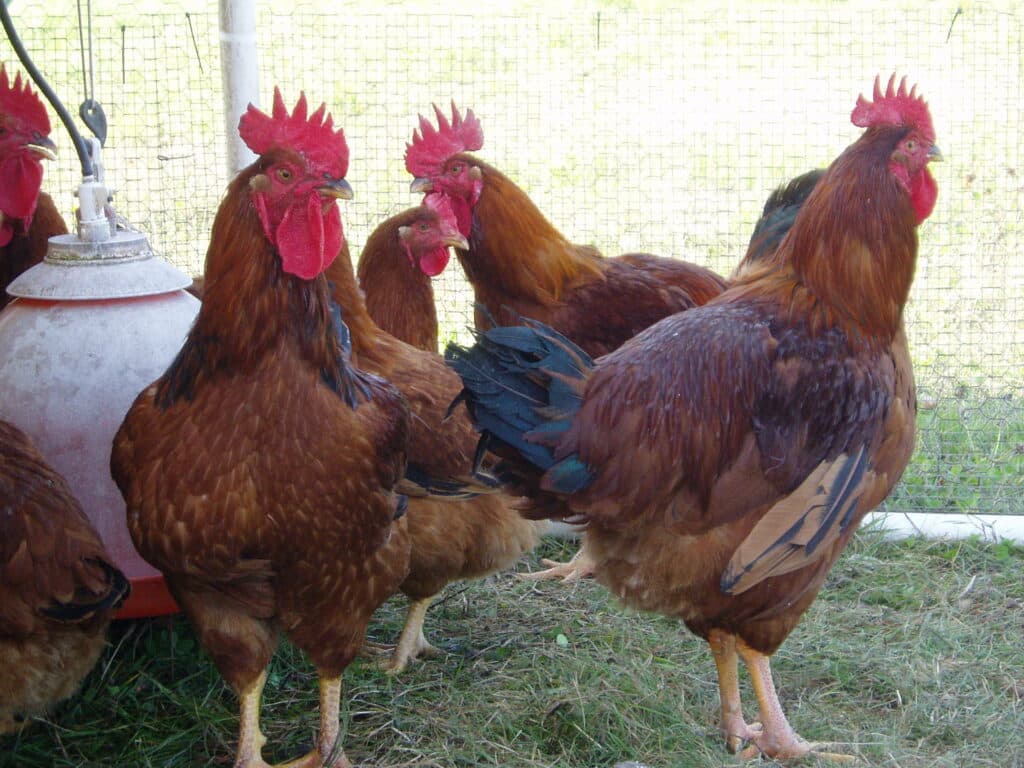 The red ranger chickens enjoying the fresh grass of their tractor pen. Photo by Laura Berlage.

“How many birds do we have on the farm right now?” I wondered aloud at the breakfast table the other morning.  Late June is when we’re at our peak for poultry numbers, as everyone has either arrived in the mail or been hatched from the incubator, and butchering season doesn’t start until late July.

I began recounting the groups and their location, while Mom typed the numbers into her phone’s calculator.  We can do the math together quick.

There’s between 130 and 150 laying hens in their summer hay wagon coops in the pasture, plus about 22 turkeys in the breeding group in their trailer coop on the field as well.  About 22 ducks in their hooped tractor pen are in the pasture, and that covers the egg laying groups.

Then, there are 150 Red Ranger meat chickens in their two PVC tractor pens, marching across the field next to the turkeys.  150 more red ranger chicks are in the brooder coop, ready to bust at the seams.

For young turkeys, there are 25 that we hatched plus a new heritage breed we ordered in the overwintering hen coop that we remodeled this year, plus 15 more younger white turkey poults in the brooder coop, waiting to grow bigger to join the crew.

30 Silver Laced Wyandotte pullets (young laying hens) are in the parked red mobile coop (the one that got its red door painted with a rooster on it lately), and in a box in our basement are 25 little baby hen chicks we just hatched from our own eggs.

Today, it’s time for a bit of a shuffle in the poultry housing department, accommodating the different groups as they grow.  The Red Ranger chicks in the small brooder coop are two weeks old, and they’ve completely filled their space.  This is when they need to move to the red mobile coop.  But there’s those Wyandotte pullets in there, so where will they go?

The pullets are finally big enough and feathered enough to be outside full-time.  For this, we have an A-frame coop on trailer jacks that can act as a type of tractor pen, or a nice home from which to build a small run.  There is no floor, so the birds have full access to the bugs and grass underneath.  This coop has given us many years of service, but the wood structure was showing ware, so it needed some repairs.

Soon as the repairs are complete, the pullets can move into the A-frame, the red ranger chicks can move into the red mobile (which will give them much more space than their current location).  I can then clean out their spot in the brooder coop and move the newly hatched chicks in our basement out there.  Then there won’t be birds in the house—yay!

From there, the younger Red Rangers will be able to move out to the PVC tractor pens once the older group is gone, and as the younger turkey poults are able to join their friends next door and enjoy the leafy pen just outside the door, the little pullets will be able to have the whole brooder coop and its accompanying run.

That’s quite a crew of poultry to attend each morning!

Moving all those birds to their new homes today will be quite a process.  Being moved is not their favorite part, but once they can stretch out into their new digs, the birds are delighted.  The pullets will be ecstatic to explore grass and bugs, the little Red Ranger will be thrilled at more space and bigger feeders and waterers, and the little chicks will love having more room to run around and eat and drink their fill, rather than the little box they currently inhabit.

When the new housing is all prepared, I have a special tub bucket that I use for my young bird transport.  I line the bottom with straw to keep it comfortable and to allow a stable surface for their tiny feet, then grab a trusty pair of work gloves to protect my hands from the tiny claws.  One at a time, I catch the birds and tuck them into the tub.  Once I have a nice batch, I grab the handles and make my way out the door of the current housing and across the barnyard to the next home.  Propping the tub, I open the door and take out each bird one at a time, setting them in the new, fresh bedding.

At first, they freeze, eyes wide.  Where am I?  What has just happened?  But as their friends start to join them in numbers, they un-freeze and begin exploring.  Within a few short minutes, they are quite adjusted to their new home.  Yay!

Sounds like it’s time for a hearty breakfast before we start our poultry moving day.  See you down on the farm sometime.

About the author: Laura Berlage is a co-owner of North Star Homestead Farms, LLC and Farmstead Creamery 715-462-3453 www.northstarhomestead.com