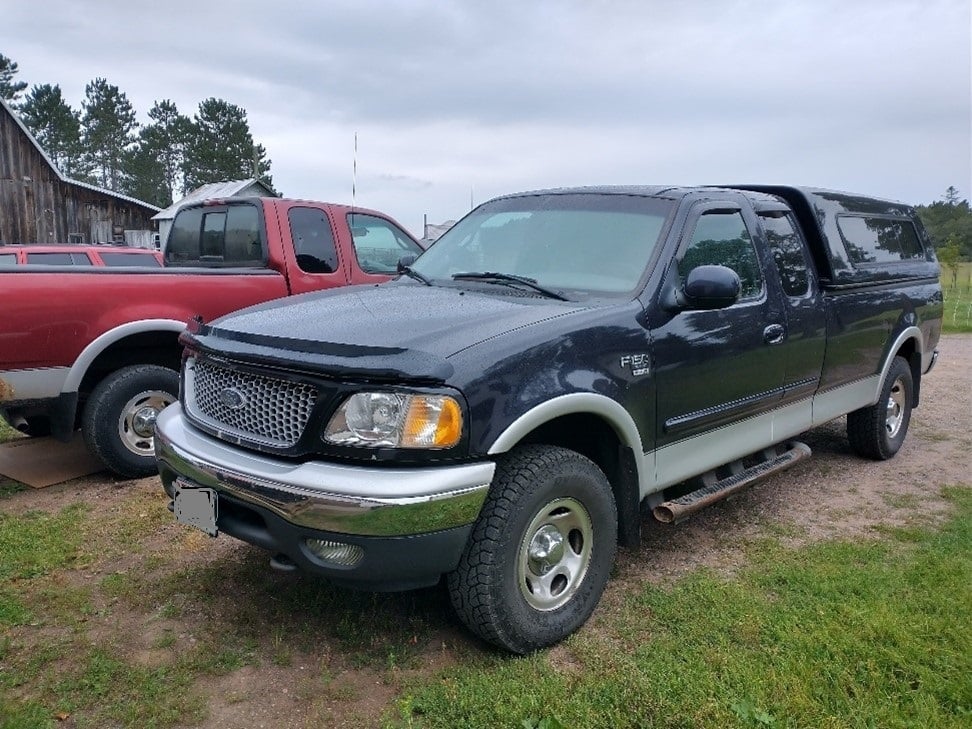 Our truck upgrade, with the rust bucket in the background. Photo by Laura Berlage

Gotta love ‘em, gotta have ‘em, even when they’re somehow in the repair shop every other week.  They’re dusty, rusty, chronically have manure somewhere on and in them, and sport hay-studded baling twine crammed into the door pockets meant for drinks and maps.  Those farm trucks take a beating over the years, pulling stuck equipment out of the mud, hauling wood and livestock, towing trailers all over the countryside, and tearing through weather that would leave our cars stranded.  It’s hard to imagine a working farm without one!

Now, we’re not talking about the sporty, short-bed toy haulers, spotlessly clean and shiny.  To be a farm truck, it has to have character—like a missing running gear, a latch in the back that won’t open unless you body-slam the tailgate first, automatic locks that don’t work and cause the driver to lean over as far as she can reach to pull up the tab and let the passenger inside.  They need dings and cracks and scratches from that time you backed around the corner a little too sharp or barely made it past that tight spot on the trail in the woods.  And the inside should look like a mix of a large animal vet clinic, the hardware store, and a towing company.

The back seat of our 1999 Ford F150 usually contains these essentials:

This old truck, which Grandpa bought used back when we were just starting our farming endeavors, has been put through the test over the years.  We’ve drug livestock shelters about, run to a number of states to pick up breeding rams or pigs, used the cab with the heat cranked up as a last-minute brooder for baby chicks when the power went out in the middle of the night (before we invested in a generator), hauled recycling into town and building supplies back, and dared its four-wheel-drive up wintry mountains in Vermont for cheesemaking internships.

But then, last week, the old truck made its last trip off the farm.  Kara was on her way home from delivering sheep to the butcher, when the back end seized up with a howling sound.  A friend helped pick up the trailer, while Steve performed truck first aid and limped it home.  Taking apart the real axel, the issue this round proved to be a much bigger deal than the old rust bucket was worth.

But we’d already replaced so many parts on the poor thing.  Could we find a in-better-shape replacement of the same make and model?  We could use the replaced parts on this one as spares.  That would certainly be better than buying a new one, which would be leagues outside our price range!

Whether by luck or heavenly provision, a rigorous online search connected us with exactly what we were looking for within reasonable driving distance.  A blue version of our old red beater (with topper and trailer breaks) had been the trusty hauler for a mechanic and his race car.  The race card had sold, and he’s just listed the truck the day before.  It had seen a fair number of miles, but it was sure better off than ours, well cared for, with an immaculate log of maintenance.  After Mom and Steve were able to give it an inspection, a deal was struck, and the new wheels were brought home.

Kara’s already christened our new farm truck by hauling a load of bedding shavings from the local sawmill Maina Hardwoods.  We’re grateful to all the years of service given by the old red Ford Grandpa bought so many years ago, and we may fix it up enough to have it haul chicken tractors and bales around the farm.  I’m sure it won’t take long for the blue Ford to become a bonified farm truck, equipped with the requisite baling twine, half a hardware store, tow straps, and more.

Do you have farm truck memories or stories?  Find some time to share them this week, along with a few chuckles over the adventures and misadventures they entail.  I’m still getting used to seeing this blue one in the barnyard!  See you down on the farm sometime.